I have given up trying to stop the new D-O-G from sleeping on my bed. It has become a nightly battle of wills and cunning which, to be frank, I'm normally too tired to bother to fight.

The night starts well. I go upstairs, Jade (the D-O-G) races ahead of me and jumps onto the duvet, looking guilty but hopeful. I order her off and into her own bed. She obeys, giving me those hard-to-resist, sadly reproachful, bambi eyes. I get undressed, climb into bed (my bed, not hers) and turn off the light.

I start to fall asleep. After a few minutes, I hear a close-up snuffling, accompanied by a wave of dog-food-flavoured halitosis, as Jade checks my eyes are shut. There's a brief scuffling noise then a sudden thump and the whole bed shakes as four stone of labrador leaps over my body and curls up beside me.

The first few days I tried ordering her off and - when that failed- physically kicking her off. The result? Go back to the words "I start to fall asleep..." and re-read. So I gave up. I now share my bed with a huge, hairy black - and above all RESTLESS - hound. At 6am, no matter how late I went to bed, she shifts round until she's standing on my head and licks my eyes - yes, my eyes -  until I wake up enough to get up and let her out.

Oh, and yes - I have tried shutting her out of the bedroom. Experimentation has shown that it is easier to sleep with a heavy dog on your bed than with all-night-long scratching, howling, whining and barking outside the bedroom door.

I might have to admit defeat. I'll give my bed up entirely to Jade, and spend the night myself curled up in the dog's bed. At least I'd get a full night's sleep.

Posted by Life according to Norris at 13:44 No comments:

So I am starting a new year with a new D-O-G. Here she is: 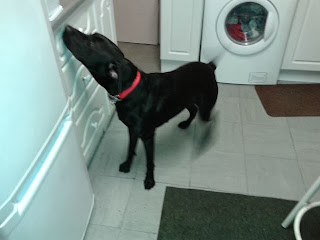 Sadly, not long before Christmas, I had to take the awful decision to have my last D-O-G put to sleep. This is possibly the hardest decision I have ever had to make. The worst part is the guilt - does he understand why I am condemning him to death? Would he agree with the decision if he could communicate? Would he get better if I waited a bit longer? 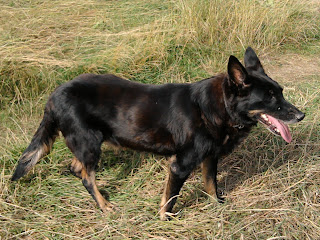 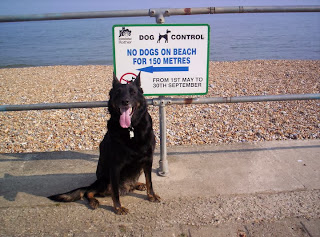 Merlin was an exceptional dog; super-intelligent, extremely communicative, unfaultably obedient and devoted. He had a unique character, fun, witty (in a canine way), remarkably telepathic, and he loved life and loved me. I shall never forget him and, even though our house now has a new dog to fill the empty corners, I still miss Merlin every single day. He's buried at the end of our garden, with a Japanese Maple Tree over him.

A good friend of mine sent me a poem by Rudyard Kipling  - it expresses beautifully the ache of not hearing those four feet trotting behind you ... here it is:

I have done mostly what most men do,
And pushed it out of my mind;
But I can't forget, if I wanted to,
Four-Feet trotting behind.

Day after day, the whole day through --
Wherever my road inclined --
Four-feet said, "I am coming with you!"
And trotted along behind.

Now I must go by some other round, --
Which I shall never find --
Somewhere that does not carry the sound
Of Four-Feet trotting behind.

Posted by Life according to Norris at 13:03 2 comments:

Doing Christmas Wrong (Or - a plea to bring back Twelfth Night)

MERRY CHRISTMAS!.....Yes, I know, it's January 2nd. Are you feeling a bit flat? Did Christmas seem to just peter out sometime during Boxing Day? Are your decorations (assuming they are still up) starting to look as faded and redundant as an OAP's clitoris? That's because nowadays we are all... Doing Christmas Wrong.

It's still Christmas. Yes it is. Unfortunately nowadays we Do Christmas by having a four-week splurge of spending, Christmas Parties, Carol Concerts etc etc etc from December 1st until Dec 24th, stuff ourselves on Dec 25th, then...that's it. Say 'Merry Christmas' to someone after Dec 25th and they look at you like an idiot.This is what I call Doing Christmas Wrong.

Christmas is the twelve-day period from 25 Dec to 5 Jan. That is the period in which we are supposed to sing Christmas Carols, have Christmas parties, wish each other 'Merry Christmas' and all that. THAT is "Christmas" - not the four weeks leading up to it. It is NOT Christmas on December 1st, December 15th or even December 24th.

Christmas traditionally starts and ends with a bang. It is supposed to start with a party on Christmas Day (the First Day Of Christmas) and to end with a Twelfth Night Party on the night following Jan 5th, during which the Christmas Decorations get ceremoniously taken down, to the accompaniment of specific Twelfth Night carols (Wassailing - here's an example: http://www.youtube.com/watch?v=j1Ea-fIPj6k). It's the loss of the tradition of the Twelfth  Night Party which has lead to most modern Christmases feeling a bit...anti-climatic. Twelfth Night used to be a huge celebration - as big as Christmas Day itself. Shakespeare's play "Twelfth Night" was specifically written to be performed at a Twelfth Night Party. Nowadays we spend weeks preparing for one day -  when we should be preparing for 12 days. Today, we have done with our celebrations before the festive season has actually started!

Commercialism is, of course, to blame for this - we are pressurised by retail stores and TV advertising to start feeling'christmassy' as early as late November, and the pressure to be Festive is applied throughout the first three weeks of December - but stops completely before Christmas day, which is in fact the first true day on which we are meant to celebrate Christmas!

Here's how a 'proper' Christmas - in the traditional, non-commercial sense- should be celebrated:

1st - 24th December - Do nothing. It's not Christmas yet. Mark the 'Advent' season by lighting a candle on each of the four Sundays before Christmas.

Evening of 5th January - 6th January - Throw Twelfth Night Party, centered around food and drink. Serve Wassail punch and sing Wassail songs. Serve a Twelfth Night cake, containing a bean which makes the finder the King of the festivities for the evening.During the celebrations, officially mark the end of Christmas by taking down the Christmas Decorations while singing Christmas Carols.Some parts of the country have specific Twelfth Night traditions, such as Kent's tradition of Wassailing Apple Trees on this night to ensure a good harvest in the coming year (see picture) 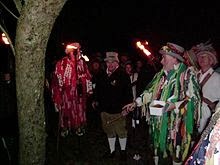 So - next year, let's forget all the commercialism and peer pressure. Let's Do Christmas Right for once - start and end it on the proper dates, with a proper bang ... let's Bring Back Twelfth Night!

Posted by Life according to Norris at 15:51 No comments:

...so I've taken the plunge and started a Blog. I'm not sure why. They say - the mystical 'They' who say such things - that everybody has a story to tell. This Blog may, or may not, tell my story.

There is a part of my life of which I am not proud ("The Experience"), but which is an inescapable and vital part of my recent past. I have not yet decided whether or not to share this with you...it is certainly the most interesting thing that has ever happened to me...let my confidence grow a bit, dear reader, become my friend and confidant, and perhaps my full story will be told. In the meantime....

I am (mumble mumble cough) years old, and live in Hastings in the county of East Sussex, England, UK. Hastings is an historic seaside resort which, although not exactly 'run down' as yet,  is certainly blinking in the oncoming headlights. It has a few claims to fame:

Since "The Experience" I have lived back at the parental home with The Wrinklies (Consisting of The Aged P and The Aged M) and The D-O-G. (Owners of D-O-G-S will know why I have to spell the word. There are certain words which have to be spelt around D-O-G-S, such as W-A-L-K,  B-I-S-C-U-I-T  and C-A-S-T-R-A-T-E-D)

Prior to "The Experience" I was an Accountant (See "Things I Don't Talk About"); currently I am in training with a certain famous London theatre to become a professional toastmaster. The world will always need toast.

I am writing this Blog because - well, because somebody said to me "Why don't you write a Blog?"

So here it is. I hope you enjoy it.
Posted by Life according to Norris at 16:03 1 comment:

Email ThisBlogThis!Share to TwitterShare to FacebookShare to Pinterest
Labels: Hastings

Itchy fingers. My first blog space spreads itself wantonly before me, waiting for me to type. I stare at it. It is - what's the best word - ' blank'? - is 'virgin' a better word to use? No, 'virgin' sounds a bit corny, and slightly...sexual (or, more accurately I suppose, pre-sexual). Let us settle for 'unsullied'. It shan't take long for me to sully it.

...and as I read over what I have typed so far, I realise that the very first word of this brand new blog, in which I present myself for approval before my friends, family, casual readers and, in fact, the entire world is - "itchy."

Oh well. Such are the perils of Life According to Norris.


Posted by Life according to Norris at 15:19 No comments:

Life according to Norris